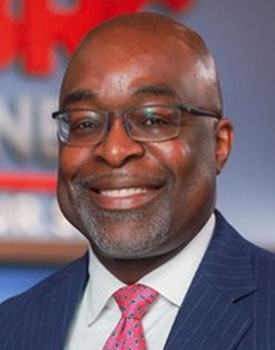 Steve Crocker co-anchors the 6 and 9pm newscasts at WBRC FOX6 News. Steve grew up watching television news in Queens, New York and was introduced to broadcasting by his older brother Rob, who does jazz radio in the New York area. Steve’s broadcasting career began at WCLK radio in Atlanta, while attending Morehouse College, where he earned a B.A. in Mass Communications. After working as a producer and reporter at several radio stations in Atlanta in the late 80’s, he moved to TV in 1990, as a news writer for CNN, working on stories including the fall of the Soviet Union, the Los Angeles riots and the O.J. Simpson trial. On occasion, Steve also filled in as an anchor for CNN, Headline News and CNN’s Airport channel.

In 1995, Steve went to work as a reporter and morning anchor for KDFW-TV, the Fox station in Dallas. In 1998, Steve moved to WIS-TV in Columbia, S.C. to anchor the 6pm & 11pm news. In 2003, Steve joined the WBRC/FOX6 team and has been proud to be in Birmingham ever since.